On Wednesday, June 14, 2017, at approximately 2:02 a.m., Killeen Police Officers responded to the Hallmark Inn and Suites located at 4500 E. Central Texas Expressway after receiving a call about a suspicious person attempting to enter the back door to the office of the hotel.  The caller also advised the suspicious person fired multiple shots at them and fled on foot.  No injuries were reported and officers were unable to locate the suspect.

The suspect is described as a black male, average build and was last seen wearing a black hooded sweatshirt and a beanie style hat.  The male has a beard and mustache.  Security camera images of the suspect are attached.

Detectives with the Criminal Investigation Division, Violent Crimes Unit, are asking if anyone has any information on this crime or this suspect to contact Crime Stoppers anonymously at 254-526-TIPS (8477) or go online anonymously at www.bellcountycrimestoppers.com.  You can also download the P3tips app for IOS and Android to give an anonymous tip.  All information is confidential and anonymous and if your tip leads to the arrest of the suspect(s), you could be eligible to receive a reward up to $1,000 in cash. 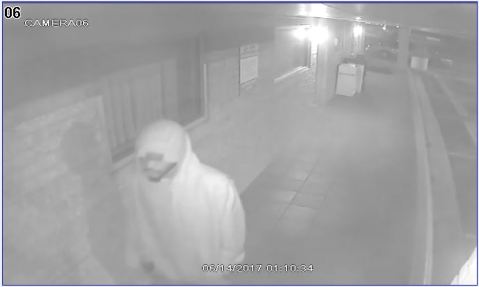