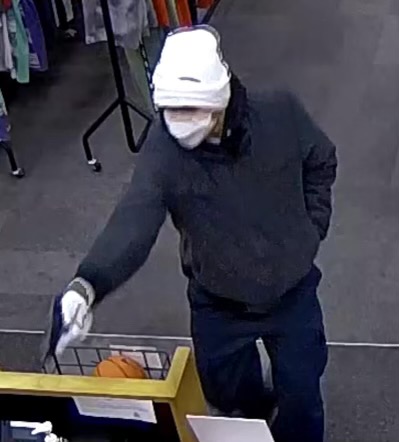 Killeen, TX (December 8, 2021): Detectives with the Violent Crimes Unit are actively investigating the shooting at the Killeen Mall.

On Tuesday, December 7, 2021, at approximately 7:17 p.m., Killeen Police responded to a 911 call in reference to a shots disturbance at the Killeen Mall located at 2100 S. W.S. Young Drive. Multiple 911 calls were received from callers stating that they heard multiple shots inside the mall, prompting a large police and fire response. Upon the officer’s arrival, they located one victim and began to safely evacuate the patrons from the building.

The preliminary investigation revealed that the suspect seen in these photos entered the mall and walked into one of the businesses. He approached the counter and discharged a black handgun, wounding one male. The suspect then fled in an unknown direction on foot. The victim was airlifted to Baylor Scott & White Hospital in Temple.

The victim is currently in stable condition.

The suspect is described as a medium build white male and was last seen wearing a white beanie, a white mask and gloves, and dark color clothing.

Detectives are actively investigating this shooting and there is no additional information at this time. 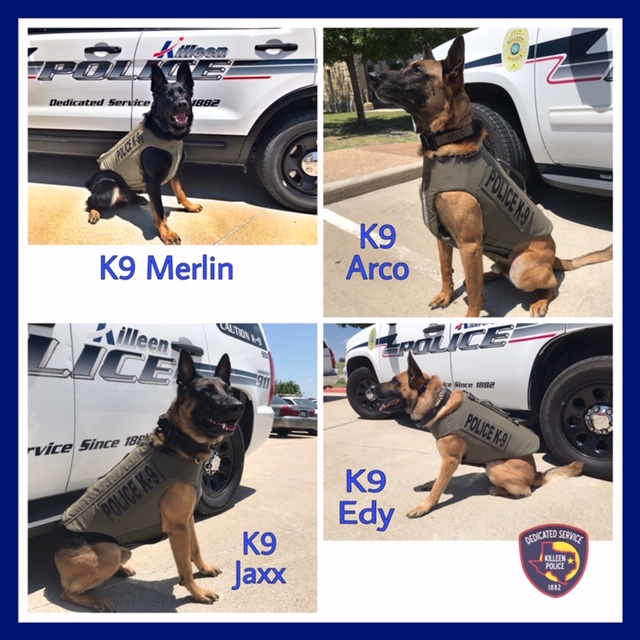 Vested Interest in K9s, Inc. is a 501c(3) charity located in East Taunton, MA, whose mission is to provide bullet and stab protective vests and other assistance to dogs of law enforcement and related agencies throughout the United States. The non-profit was established in 2009 to assist law enforcement agencies with this potentially lifesaving body armor for their four-legged K9 officers. Since its inception, Vested Interest in K9s, Inc. provided over 3,500 protective vests in 50 states, through private and corporate donations, at a value of $5.7 million dollars.

The program is open to dogs actively employed in the U.S. with law enforcement or related agencies who are certified and at least 20 months of age. New K9 graduates, as well as K9s with expired vests, are eligible to participate.

The donation to provide one protective vest for a law enforcement K9 is $950. Each vest has a value between $1,744 – $2,283, with a five-year warranty and an average weight of 4-5 lbs. There are an estimated 30,000 law enforcement K9s throughout the United States. For more information or to learn about volunteer opportunities, please call 508-824-6978. Vested Interest in K9s, Inc. provides information, lists events, and accepts tax-deductible donations of any denomination at www.vik9s.org or mailed to P.O. Box 9 East Taunton, MA 02718.

On Sunday, November 19, 2017, at approximately 3:00 a.m., Officers were dispatched to the intersection of Ft. Hood Rd. and Jasper in reference to a two vehicle crash.  Upon the officers’ arrival, it was discovered that a silver Nissan Altima had been stopped at the red light in the northbound outside lane of Ft. Hood Rd. at Jasper when the second vehicle, a black Kia Forte, traveling northbound on Ft. Hood Rd. collided with the rear of the Nissan.

The preliminary investigation revealed that Dustin Corey Moore, the operator of the Kia, did not appear to brake or take other evasive maneuvers prior to colliding with the rear of the Nissan.  Donald Christian Adu Larbi the driver and Tanya Evette Perry the passenger of the Nissan were pronounced deceased on scene at 4:10 a.m. and 4:11 a.m. respectively on Sunday, November 19, 2017, by Justice of the Peace Bill Cooke.  Moore, who was the sole occupant of the Kia, was transported to Darnell Army Medical Center where he later succumbed to his injuries and was pronounced deceased.

The Killeen Police Department Traffic Unit continues to investigate this crash and information will be released if it becomes available.

On Sunday, November 12, 2017, at approximately 2:10 p.m. Killeen Police were dispatched to the 1000 block of Cedar Drive in reference to a 911 call about a shooting victim.  Upon the officers’ arrival, they found a male lying in the roadway suffering from a gunshot wound.  Officers immediately started to perform life saving measures until paramedics arrived.

The preliminary investigation revealed that the victim and suspect were involved in an ongoing dispute.  At the time of the incident, the two began a verbal altercation when at some point one of the subjects’ discharged a firearm at the victim.   The victim, 27 year-old Curtis E. Shelley of Killeen, succumbed to his injuries and was pronounced deceased by Justice of the Peace Claudia Brown at 4:52 p.m. An autopsy has been ordered to be performed at the Southwestern Institute of Forensics Sciences in Dallas.  Through the investigation detectives were able to identify the parties involved and the investigation is ongoing.  The case will be sent to the Bell County District Attorney’s Office for review.

UPDATE :  All subjects in this incident have been identified.  It was discovered during the course of the investigation that one of the parties involved is related to a Killeen Police Department employee, and therefore in the interests of transparency the Police Department has invited the Texas Rangers to review and assist in the progress of this investigation.

Detectives with the Killeen Police Department’s Criminal Investigation Division are asking anyone who may have additional information about this incident to contact Crime Stoppers at 254- 526- TIPS (8477) or go online at www.bellcountycrimestoppers.com.  You can also give an anonymous tip by downloading the P3tips app for IOS and Android.  All information is confidential and if your tip leads to the arrest of the person(s) responsible for this incident you could be eligible for a reward up to $1,000 in cash.

The Killeen Police Department will be providing extra patrols in our major shopping areas during the holiday season.  This event will run from November 17th through December 24th.   Shoppers can look for the Killeen Police Department’s Mobile Command Center in the major shopping areas on the weekends.  We will be posting the locations each week.  This will be an opportunity for you and your family to meet your community police officers, ask questions or obtain assistance.

We would like to wish everyone in the community a safe and happy holiday season.

The Killeen Police Department Special Victims Unit has been conducting an investigation into the allegations made by a 7 year old child.

A warrant for arrest was issued on October 18, 2017. Williams may be driving a black in color Nissan Sentra with the Texas license plate of JVW1488. Williams is known to frequently travel between Killeen and Lubbock.

The suspect is now in custody at the Bell County Jail.  The Killeen Police Department would like to express it’s appreciation for the support of the community, whose cooperation has assisted us in this investigation.

On Monday, October 16, 2017, at 8:40 p.m., officers of the Killeen Police Department were dispatched to MetroPlex Hospital in reference to an assault alleged to have taken place 20 minutes earlier at Lions Club Park.

Upon the officer’s arrival, the victims advised the officers that they had been walking the exercise path at the park and they were returning to their vehicle when they were approached by 3 to 4 black males. The victims stated that as they were trying to enter their vehicle the suspects assaulted them and took a backpack from the vehicle.  The suspects could only be described as black males wearing sweatshirts, hoodies and basketball shorts.  Based on the victim’s statements, a report for robbery was filed by officers.

Detectives are asking that anyone who may have witnessed, or have knowledge of, this robbery to please contact Crime Stoppers at 254-526-TIPS (8477) or go online at www.bellcountycrimestoppers.com.  You can also download the P3tips App for IOS and Android and give an anonymous tip.  All information is anonymous and confidential and if your tip leads to the arrest of the suspect, you could be eligible for a reward up to $1,000 in cash.

On September 23, 2017, at approximately 3:00 p.m., a dog found a dead bat in the 2300 block of  E. Veteran’s Memorial Blvd.  The dog, a 14 week-old Chihuahua, brought the bat to its owner, who in turn brought it to Killeen Animal Services.  Following protocol, the bat was sent to The Texas Department of State Health Services – Laboratory Services in Austin for testing.  Animal Services was notified that the tests were inconclusive and must be treated as though they are positive.

This public notification is required in such cases.  There is no other evidence of rabies in the area.  Anyone observing a dead animal, one appearing sick or behaving strangely should contact the Killeen Police Department, Animal Services at 254-501-8800 immediately.

This week is National Rail Safety Awareness Week.  The Killeen Police Department Traffic Unit, along with the Burlington Northern Santa Fe Police Department, worked a traffic enforcement detail today at the railroad crossing on State Highway 195 (Fort Hood St.)   Six Killeen PD Traffic Officers and one BNSF Special Agent participated in the detail and stopped vehicles for violations of the Texas Transportation Code pertaining to railroad crossings.  The detail began today at approximately 10:30 a.m. and was completed at approximately 12:45 p.m.

Forty vehicles were stopped during the detail and officers issued 53 citations for the following:

30 for stopping within 15 feet of a railroad track

5 for stopping on the railroad tracks

13 for other non-hazardous violations (Failure to Maintain Financial Responsibility, No Driver’s License, etc.)

The Killeen Police Department wants to remind the public to observe all railroad warning signs.  It is unsafe and unlawful to disregard warning signals and stop on or within 15 feet of the tracks.

On September 28, 2017, at approximately 12:00 p.m., Killeen Police responded to the 700 block of Reese Creek Road, near the Maxdale Road intersection, in reference to a man down call.  Upon arrival, officers met with a U.S. Postal Carrier who was delivering mail in the area.  The mail carrier reported that he was traveling westbound on Reese Creek Rd and observed the person lying in the roadway.  The male subject was deceased and had an apparent gunshot wound.  The victim is a black male, approximately 30 years old, and has not been positively identified.

The victim was pronounced deceased by Justice of the Peace Claudia Brown.  An autopsy was ordered.  Additional information will be released as it becomes available.

Detectives are asking anyone who has information about this case to contact Crime Stoppers at 254-526-TIPS (8477) or go online at www.bellcountycrimestoppers.com or text BELLCO along with the tip to 274637.  Text HELP to 274637 for help with the tip or text STOP to 274637 to stop the tip.  Message and data rates may apply. All information is anonymous and confidential; if your tip leads to the arrest of the person involved in this case you could be eligible for a reward up to $1,000 in cash.