Officers responded to the Family Dollar located at 2304 Stan Schleuter Loop at 9:13pm, on Monday, December 7, 2015, after receiving a 911 call advising the store had just been robbed.  Upon the officers’ arrival they were told an armed black male, approximately 6’0” tall, wearing a red hooded sweatshirt, red sweatpants and a red bandana, entered the store and demanded money.  The officers were also told the suspect fired his weapon several times inside the store then fled the area.  No one was injured during this incident.  The officers searched the area but were unable to locate the suspect.

Detectives are asking anyone who may have information about this Robbery or may have information about the suspect to contact Crime Stoppers at 254-526- TIPS (8477).  They may also contact Crime Stoppers at www.bellcountycrimestoppers.com or text BELLCO along with their tip to 274637.  Text HELP to 274637 for help with the tip or text STOP to 274637 to stop the tip, data rates may apply.  All information is confidential and you will remain anonymous.  If your tip leads to the arrest of the suspect you could be eligible for a reward up to $1,000 in cash. 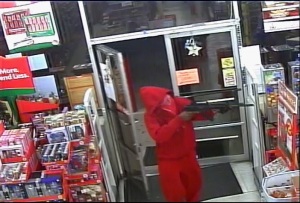