(RAW DATA ONLY, population increase/decrease not factored into data)

The Killeen Police Department has released its 2019 Part 1 Uniform Crime Report (UCR) for violent and non-violent crimes.  The data released are raw numbers and do not reflect the crime rates for Killeen, Texas.  The U.S. Census Bureau has not released the 2019 population estimates for Killeen.

Compared to 2018, Killeen’s 2019 Part 1 Reported UCR Crimes increased 3%.  The biggest contributing factor to the overall increase in crimes was auto thefts.  According to Chief Kimble, “we continue to encourage citizens to practice basic crime prevention techniques, unfortunately many citizens still leave their keys in their cars, leave them unlocked as well as leaving valuables in plain view.  We look forward to continuing our partnerships to make 2020 a safer year.” 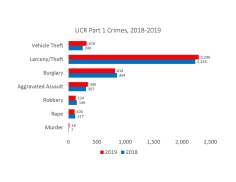 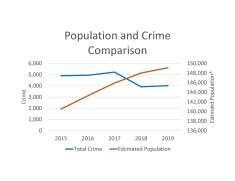