Killeen Police are asking for the community’s help identifying a suspect from a burglary of a vehicle and debit card abuse case.

Officers filed a report on Sunday, November 13, 2016, in reference to a burglary of a vehicle and debit card abuse. The victim told the officer that while they were shopping at Kohl’s, their 2012 Toyota Prius was burglarized in the parking lot and their wallet was missing.  The victim said that their USSA debit card was in missing wallet and used to make unauthorized purchases at K-Mart in Killeen and the HEB in Harker Heights. 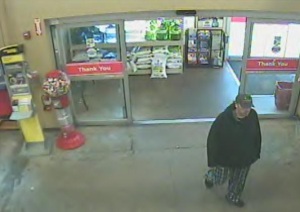 Detectives were able to obtain photos a of the suspect and are asking anyone who can identify the suspect in the attached photos to contact Crime Stoppers at 254-526-TIPS (8477) or go online anonymously at www.bellcountycrimestoppers.com.  You can also download the P3tips app for IOS and Android to give an anonymous tip on your mobile device.  All information is anonymous and confidential and if your tip leads to the arrest of the suspects responsible for this crime, you could be eligible for a reward up to $1,000 in cash.