Killeen Police responded to the area of Hwy 190 and Knights Way Exit, at 7:47pm, on Monday, May 9, 2016, after receiving a 911 call in reference to a motorcycle crash.  Upon the officer’s arrival, they located a black motorcycle on its side and the operator of the motorcycle inside the van. Unfortunately the driver of the motorcycle succumbed to his injuries and was pronounced deceased at the scene, at 8:21 pm, by Justice of the Peace Garland Potvin.  The deceased is identified as 33 year old Ellsworth Allen Raup III. 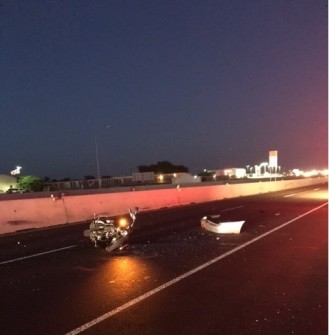 The preliminary investigation revealed that the green 1998 Toyota Sienna van was traveling eastbound in the outside lane on Hwy 190 and the black Honda motorcycle traveling behind it.  Due to the construction on the highway, traffic ahead was being directed to one lane and was slowing down; as the van nearly came to a stop, the operator of the motorcycle was following too closely, causing it to collide into the rear of the van. The operator of the motorcycle was ejected and went through the rear window of the van.  The driver of the van was transported to Seton Hospital with minor injuries.

This crash continues to be investigated by the Killeen Police Department Traffic Unit.