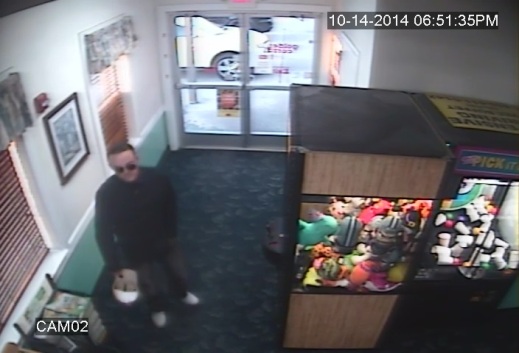 Killeen Police are asking for the community’s help identifying a robbery suspect.

Officers responded to a 911 call on Tuesday, October 14, 2014 at 7:30 pm, telling them of a suspicious person at Golden Coral located at 1420 E. Central Texas Expressway.  Upon the officers arrival they were told that a male came into the restaurant and waited until there were no customers at the cash register. The suspect then made his way to the cashier and demanded the employee open the cash register; employee called out for help and the suspect fled the restaurant in an unknown direction. No one was injured during this incident.

Detectives were able to obtain photos of the suspect.  The suspect was described as a white male with short black hair, wearing a white ball cap and sunglasses, approximately 5’8” tall and weighs about 200 pounds. He has a tattoo on his right hand and had black tape wrapped around all of his finger tips.

Detectives are asking anyone who can identify the suspect or has information about this incident to contact Crime Stoppers at 254-526-TIPS (8477), go online at www.bellcountycrimestoppers.com or text BELLCO along with their tip to 274637. Text HELP for help with the tip or text STOP to stop the tip, message and data rates may apply. All information is anonymous and confidential and if your tip results in the arrest of the suspect involved in this crime you could be eligible for a reward up to $1,000 in cash.