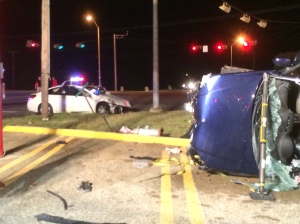 Officers responded to W.S. Young Dr. and Veteran’s Memorial Blvd, at 4:14 am on Saturday, July 19, 2014, after receiving a 911 call telling them there was an accident with injuries.  Upon the officers arrival they located a white Nissan Altima and a blue Hyundai Elantra turned over onto the driver’s side with the unresponsive driver pinned inside.

The preliminary investigation revealed that the Nissan, with three occupants, was traveling eastbound in the outside lane of Veteran’s Memorial Blvd, approaching W.S. Young Dr. and the Hyundai was traveling westbound on Veteran’s Memorial Blvd, turning southbound onto W.S Young.  The Nissan collided with the Hyundai causing it to leaving the roadway hitting the curb in the parking lot and coming to rest on its side; the Killeen Fire Department used the Jaws of Life to remove the driver from the vehicle.  Justice of the Peace Bill Cooke pronounced the 27 year old driver deceased at 4:50am and ordered an autopsy to be performed at the Southwestern Institute of Forensic Sciences in Dallas.

The front passenger in the Nissan was airlifted to Scott & White Memorial Hospital in serious condition and the driver of the Nissan was transported to Seton Medical Center Harker Heights in stable condition.

The name of the deceased male has been withheld pending notification of his next of kin.

This crash continues to be investigated and information will be released as it becomes available.