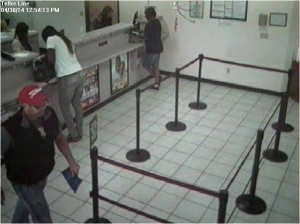 Officers responded to the 1st National Bank Texas located at 4304 E. Central Texas Expressway at 1:00pm on Wednesday, April 30, 2014, in reference to a bank robbery that had just occurred.

Upon the officers arrival they were told that an unshaven white male wearing glasses with graying hair had come into the bank and given the teller a note telling her that he was armed and demanding she give him money. He was wearing a red ball cap with “Titleist” across the front, a gray or OD colored shirt under a dark colored vest. The letter X could be seen on the shirt through the opening in the vest, light colored jeans and dark tennis shoes. The suspect then fled the bank on foot in an unknown direction. 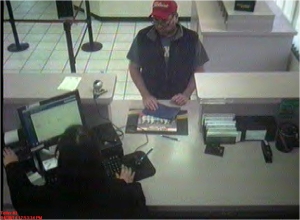 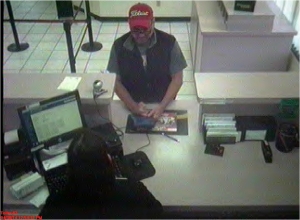 None of the employees were harmed during this incident.

Detectives are asking anyone who may recognize the suspect in the photos provided or if they know anything about this bank robbery, to contact Crime Stoppers at 254-526-TIPS (8477), 1-800-729-TIPS (8477) or go online anonymously at www.bellcountycrimestoppers.com or text BELLCO along with a tip to 274637. Text HELP for help with the tip or text STOP to stop the tip, message and data rates may apply. If your tip leads to the arrest of the suspect involved in this crime you could be eligible for a reward up to $1,000 in cash. All information is confidential and anonymous.